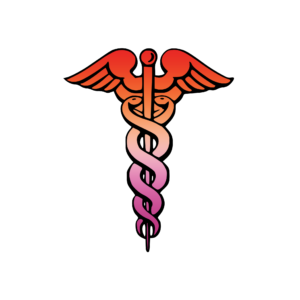 In 1977, Patty Robertson was working as a resident physician in the obstetrics and gynecology program at the University of California, San Francisco. One night when working on her gynecology rotation at SFGH, she was called to the Emergency Room to see a lesbian patient who had pelvic pain. One of the possible diagnoses was pelvic inflammatory disease, but in discussing the case with the surgery resident, neither knew if lesbians could actually get sexually transmitted diseases which could lead to pelvic inflammatory disease, or if lesbians could pass sexually transmitted diseases to female partners.

Patty, with her friends in the medical field, decided to put together a pilot study on lesbians and sexually transmitted diseases. She got permission from Dr. Richard Sweet, who ran the Department of OB-GYN at SFGH at the time, to use the Women’s Clinic in the evenings. In order to get the word out about the study that this clinic was available to lesbians, flyers were distributed at women’s music concerts, cafes, and other lesbian owned businesses. There was an overwhelming response to the flyers. Over 200 lesbians were seen in the clinic during the study in 1978, at which time they filled out an extensive questionnaire about their sexual history and received a screening, health exam, and blood tests.